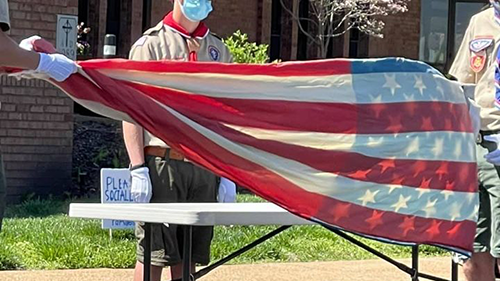 Contact information for Scouting activities is available from the church office.

Sponsored by and meets at St. Mark Church. Pack meetings are held once a month and den meetings twice a month during the school year. The pack is made up of Cub Scouts in grades one through five. Activities this past year included the Pinewood Derby, Blue and Gold Banquet, Rain Gutter Regatta and Scouting for Food.

Sponsored by and meets at St. Mark Church. Considered one of the top Boy Scout troops in the Greater St. Louis Area Council and has produced well over 200 Eagles since formed in 1966; this is one of the highest percentages of Eagle scouts from the number of boys that join. Activities this past year included: the traditional cabin camp-out at Babler State Park to work on merit badges, the President’s Day outing bus trip, Crossover at Camp Beaumont, rock climbing and rappelling at S-F Scout Ranch, and Summer Camp at S-F Scout Ranch.